On the macOS app, when in Gantt view, if you’ve right-clicked a tasks’s date, the “Move to Trash” option disappears from the context menu. Sometimes it will return if you click the top of the window, but that doesn’t always work. Going to any of the other views, like Spreadsheet, seems to bring it back.

Hey, Joe! Thanks for the report! I’m not able to repro on my end. Can you send over a screenshot?

Hopefully this isn’t confusing as I can’t post more than one screenshot per post because I’m a new user.

This one seems to just not have the Move to Trash option available. It ends at Unsubscribe instead. 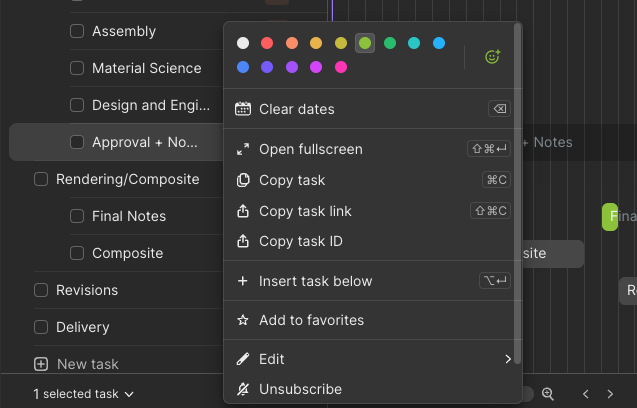 Right-clicking on the date itself also doesn’t show it. So, I thought maybe it was just happening to ones with dates, but I tested and it happened to the one right above too.

I think I know what it is. My Automation task, and all of the ones above it seem to show the Move to Trash option. It appears that when drawing the context menu dialog, if there’s not enough room to show the whole context menu it leaves off the last section.

Yep! If I extend the window, it gives me the option for ones that wouldn’t show it at all before.

Thanks, Akila! Hopefully that’s enough to reproduce. Let me know if you need anything else!

Adding an extra post so you can see that it works with the larger window. 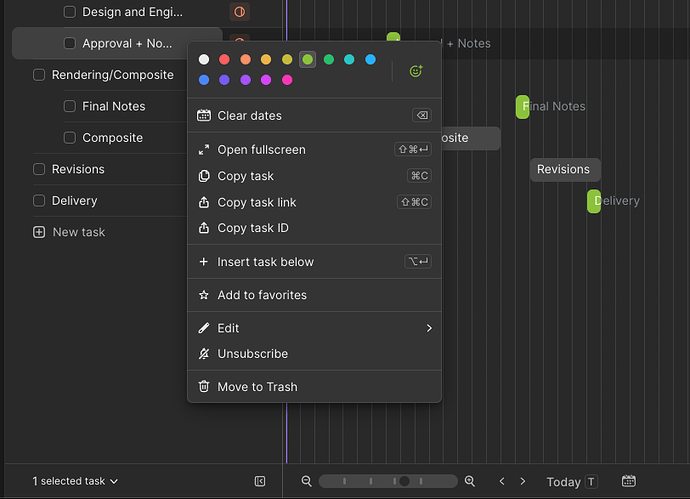 Yes! Thanks, Akila! I did not notice that at all. I’m not used to scrolling in context menus that don’t take up the whole window. Can we now change this to a request to shift the menu up if there’s space? I mean, I’d never have the window small enough that the whole menu wouldn’t fit.

Glad it worked out

And sure thing! I’ll make note of your suggestion.